Fighting on the beaches

Did you know that the half-finished manuscript of one of the 20th century's most famous novels was carried around the battlefield during D-Day? 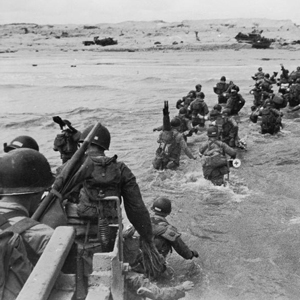 It's understandable that most of the coverage this week of D-Day's 75th anniversary will be serious and solemn. But even history's greatest events have their associated trivia - in fact the tiny curiosities are all the more fascinating because they're part of a greater story. Here are a few facts about D-Day that might have escaped your attention ...

- One of the US soldiers was a young J.D. Salinger, who had six chapters of the unfinished Catcher in the Rye in his backpack.

- One of the Canadians was James Doohan, who became Scotty in Star Trek. He lost a finger in the fighting (as you can notice in some scenes).

- The Paras' codeword was ‘fish and chips'. It was their way of telling if someone behind enemy lines at night was friend or foe - one would call out ‘fish', the other would reply ‘chips'.

- Lord Lovat landed with his bagpiper, who walked up and down the beach wearing a kilt and playing Hieland Laddie. The Germans refrained from shooting him because they thought he'd gone mad.

- The assembly point off the Isle of Wight was known as ‘Piccadilly Circus'.

- In 1943, early plans for the invasion had blown out of a window in London. They were picked up by a passer-by with eyesight so bad he couldn't read them ... so he just handed them in.

- By the morning after D-Day some enterprising French women had set up a brothel in a damaged landing craft. The police soon raided it.

- Several of the amphibious vehicles used in Normandy were later painted yellow and used by Duck Tours, who until 2017 drove tourists around London and along the Thames.