How beer shaped the Eurostar

The reason London continues to be such a great city, the reason it still captures people's imagination, is the way it marries the new and the old. A perfect example of this is the story of how the Eurostar boarding lounge at St Pancras station owes its layout to Victorian beer barrels... 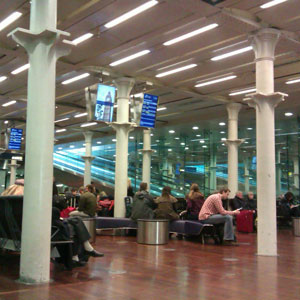 When St Pancras was being designed by Henry Barlow in the 1860s, the Midland Railway Company decided to build a rather cunning feature into the plans. They knew the Bass brewery in Burton-upon-Trent would be using Midland trains to send their beer down to London - so they asked Bass if they'd like to store that beer at the station itself, ready for its distribution around the capital. Great idea, said Bass. So St Pancras's undercroft was constructed with its supporting iron columns exactly three beer barrels apart. (The big barrels, that is, not the little ones you see behind bars in pubs.) In this way the falling-down liquid could be stored between the columns ensuring that the station didn't fall down.

As you can see in the photo, those columns (which were hardened, incidentally, by being soaked in horse urine) are still there today. Except now, instead of beer barrels between them, there are Eurostar passengers sipping lattés from Pret as they wait for their train to the continent. (Which will of course pass through the Channel Tunnel, that feat of engineering that stole the title of ‘world's longest railway tunnel' from the stretch of the Northern Line between Morden and East Finchley).

I mentioned this in a letter to the Spectator the other day, responding to an article about London and how it's cut off from the rest of the country. In a word: nonsense. In a few more words - the capital has always been tied to the rest of Britain, if only because so many of its residents originally came from there. People have always flocked to it - and even those who live elsewhere, I tend to find, like to visit (however occasionally). Resentment at ‘that there London', in my experience, is a relatively rare phenomenon.

And when people do visit the capital, and dig a little into the trivia of its history, they see how buildings like St Pancras were literally shaped by the rest of the country; its famous red bricks are that colour because they're made from Nottinghamshire clay. But more than that, they see how London's past continues to shape (again, literally) its present. A 19th century brewery (still going today) and 21st century Eurostar passengers. New and old together. Something to think about as you wait for the 12.37 to Paris.