A map on the cards

Maps, New York and cards - three of my favourite things. So a map of New York made from cards? Couldn't resist it.

I stumbled across the deck in a charity shop. The 52 cards make up a map of the world's joint-best city (London, in case you're wondering). Ace of spades in the south-west, king of clubs in the north-east. Empire State Building on the 8 of hearts, Chrysler Building on the 9 of diamonds. It reminded me of the special decks sent to Allied prisoners of war during World War II - they looked like normal Bicycle decks, but each card could be peeled apart into two very thin pieces, both of which had part of a map printed on them. When the whole deck was assembled it formed a map of the surrounding area, which the prisoners could use if they ever managed to escape. 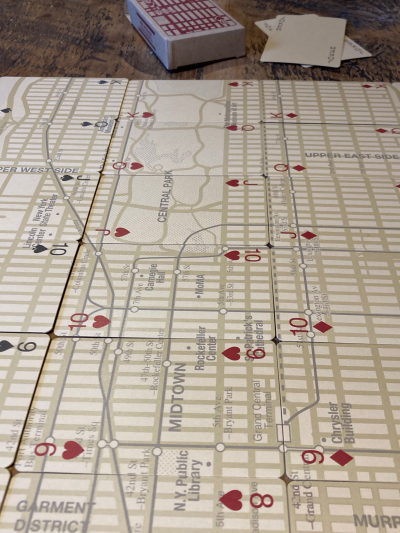 As it happens the New York deck doesn't handle too well, so I think I'll be framing it and hanging it on the wall. But it'll still come in handy for Magical Thinking sessions in New York. For instance I could have a photo of it on my phone, get someone to pick a card from a normal deck - and the card they pick will match the location we're in at that moment.

Then, of course, they'll have to work out how the trick is done ...