A pilgrimage to Lord's

Sporting history and trivia in NW8

After the incredible first Test at Trent Bridge, the Ashes roadshow now heads south to the capital. The second Test is being hosted by the venue that, whenever I'm pushed to name a favourite place in London, often gets the nod: Lord's. 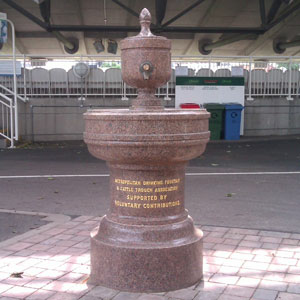 It's better than the Oval. Everyone thinks so: even though John Major chose a lifesize replica of the Oval as his Desert Island Discs luxury, people always misremember him as choosing Lord's. I think the reason the place has such a magic is that, like London as a whole, Lord's is a perfect match of the new and the old. That gorgeous 19th century pavilion (now a listed building) right opposite that space-age media centre - both of them fantastic in their different ways. The media centre, which has been said to resemble the smile of Wallace from Wallace and Gromit (though these days it always reminds me of Wall-E), was actually built in two boatyards; it's essentially a boat turned on its side, and conventional builders weren't up to the task.

I first visited Lord's as a 12 year-old, to see Warwickshire get tonked by Lancashire in the 1984 Benson and Hedges Final. We sat in the Mound stand, which in those days had long benches rather than individual seats. Our bench was a bit wonky, and after a while a couple of rather well-oiled Hooray Henries decided they'd had enough. ‘We're going to fix this,' they said as they tottered off, returning a few minutes later with a 10-foot plank of wood. Everyone was made to stand up so they could position the plank under the requisite legs of the bench, and after a bit of experimentation, hey ho, they'd completely eliminated the wobble. Much praise and thanks from all of us. ‘Hang on, though,' said someone after a while, ‘this is Lord's on a major match day. Where did you find a plank of wood like that?' ‘Doddle,' said one of the Henries. ‘It's the plank the St John's Ambulance chaps use to get people up into the back of the ambulance.'

Like any cricket fan, I love a good statistic, so have always relished the fact that Old Father Time stands 5'4" tall on his weather vane, and that the ground's famous slope measures more than the 6'6" that's often quoted. That's just the figure from north to south; there's also a slope from Pavilion to Nursery end, meaning that the north-west corner of the field is a full 8'8" higher than the south-east. Then there are the legendary honours boards in the dressing rooms, denoting batsmen's Test centuries and bowlers' Test Michelles (‘five-fors') and 10-wicket matches. Mike Atherton never quite made it onto the board; he was once run out on 99. He can console himself, though - Brian Lara, Ricky Ponting, Sachin Tendulkar and Shane Warne all failed to make the woodwork too. (The dressing rooms are one of the places you get to see on the excellent tours Lord's offer on non-match days - well worth the dosh.)

I've written previously about the beautiful water fountain behind the Compton stand (pictured), one of the few remaining working specimens left to London by the Metropolitan Drinking Fountain and Cattle Trough Association. No one ever seems to notice it, but I love refilling my bottle there on match days. There's also the unique Lord's policy of letting you take your own booze into the ground: very civil.

My favourite Lord's fact, though, concerns Albert Trott. He was the batsman who on 31st July 1899, playing for the MCC against the Australians, hit a six over the pavilion. No one had ever managed the feat before - and no one's ever managed it since. What makes the statistic particularly lovely these days is that one of Albert Trott's distant descendants is Jonathan Trott - who has still never hit a six in Test cricket. In fact he holds the record for the most runs scored in that form of the game without hitting one: 3499 as at the end of the Trent Bridge match.

So bring on Thursday, and bring on the Aussies. The Lord's website is being a little playful at the moment - its ‘404 error' message is a picture of Michael Clarke sitting on the ground looking disconsolate, next to the words ‘oops we've dropped a catch!' Given what happened with Stuart Broad the other day (i.e. Clarke didn't drop the catch), he must find that especially annoying.