Acting up - why Parliament relies on goats

The curious tale of the parchment from Newport Pagnell

It's comforting to know that in these days of tweeting MPs and office-hours sittings, Parliament still has a few of its quaint old traditions in place. Perhaps the quaintest of all is the custom of printing each new Act passed by MPs and Lords on parchment. These are then rolled up and stored in the Parliamentary Archives, housed in the Victoria Tower (the one at the far end of the building from the Clock Tower, aka Big Ben). 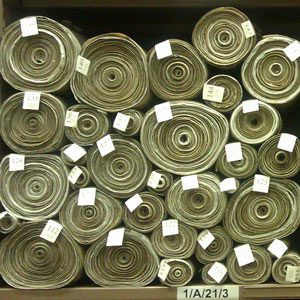 Because our humble (or not so humble) representatives are ever more eager when it comes to legislating (more Acts than Shakespeare), the Parliamentary authorities now spend £130,000 a year on parchment. Yes, you can still buy the stuff. Parliament use a firm in Newport Pagnell, apparently. Who knows how many goats and/or sheep (for they're the animals in the firing line) have to go to the great paddock in the sky to satisfy this demand for their dried skin? At least they can comfort themselves with the final thought that their ultimate sacrifice allows us to read full details of the Consumer Insurance (Disclosure and Representations) Act 2012.

I was lucky enough (thanks to the mighty London Historians) to visit the Parliamentary Archives last week, where Caroline Shenton, Clerk of the Records (ie the boss), showed us the temperature-controlled room* where all the Acts are stored. As you can see from the picture they vary in size, according to how complicated the particular piece of legislation is. The longest bill ever was the Land Tax Act of 1782. Unroll that baby and it stretches for a quarter of a mile - longer than Parliament itself.

But quaint traditions don't have to mean stuffy traditions, and Caroline revealed that the ‘handle everything with white gloves' myth is just that - a myth. In fact she's now banned them, as they make it harder for you to feel and control the document, meaning you're more likely to damage it. It's usually TV directors who want their presenters to wear white gloves, to heighten the impression of how rare and valuable the document is. Who'd have thought the media were so devious, eh?

* 16.5 degrees centigrade, since you ask