All change north of Inverness

*This post dates from September 2013. What I hadn't realised then was that the English people it mentions all have votes in the referendum.*

One year to go, as you may have noticed in The Media, until the independence referendum in Scotland. I'd hardly been north of Edinburgh before my Land's End to John O'Groats trip, so was amazed at something I encountered in the fishing villages past Inverness. It made me realise that, whatever certain politicians and commentators might say, the question isn't as simple as ‘England vs Scotland'. Here's the relevant bit from the book: 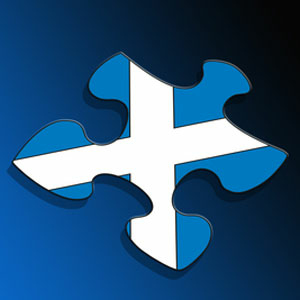 And here in Helmsdale I have, surely, found my Local Hero [all along I'd been waiting for a village like the one in the film]. The A9 crosses a bridge high over the river flowing out to sea, then the village is on the left. As I disembark I smell the salt of the sea for the first time since Cornwall. Two trawlers are chugging back into the harbour. All it needs is Burt Lancaster flying in by helicopter and the movie will be complete. I do a circuit of the village, taking in the fishing tackle shop (closed – it’s just gone five now), the fish and chip shop (not yet open) and the convenience store. There’s also a ‘collectables’ shop, one of those that’s indistinguishable from ‘woman’s home that has gradually filled with junk’.

A hearty breakfast this morning meant no lunch, which in turn means an urgent need for dinner. One of the two pubs (modern, converted from a terrace of houses, has a pool table) does me a vegetarian bake, the only disappointing thing about it being that the woman behind the bar who brings it is from London. We get talking, and I ask how she ended up here.

‘Just fancied a change of pace.’

I tell her about the woman in charge of the museum in Dornoch. She was from London too. She’d ‘followed a friend up here’.

‘Yeah. You get a lot of that. People come from northern cities too – Manchester, Leeds, all over. People want to get away from the violence.’

Uh-oh. Something tells me Local Hero is disappearing off the bill here …

The woman carries on polishing the bar. ‘I’d say … what? Forty-five per cent of this village is English now.’

And there I’d been pinning my hopes on the pub’s only other occupant, a friendly old boozer at the bar whose Scottish brogue might as well be Ukrainian for all I can understand of it. I eat, he speaks, I laugh and nod in what I hope are appropriate places. The woman can obviously understand him, and occasionally replies, more to keep me abreast of where the one-sided conversation is going more than anything else. We all get something from the experience, each corner of the triangle enjoying it in its own way. It reminds me of the subtitles American cinemas had to add when they showed Trainspotting.

But then over the road at the other pub the dream finally dies. There are ten or so people in there, the woman behind the bar a Brummie, almost all the others builders from Darn Sarf. The TV is showing a quiz show I’ve never seen before, its gimmick seemingly that it mixes very difficult questions with very easy ones.

Silence, both on the screen and in the pub.

‘Which minor key signature is identified by two flats, B flat and E flat?’

Silence in the pub. Someone on the screen says E minor. It’s G minor.

‘Mr Blobby has yellow spots on what colour skin?’

A guy near the telly turns round. ‘We’ve found the level, haven’t we chaps?’

Oh well. No mountains, now no Local Hero either. But who cares? As Oscar Wilde never said, the only thing better than having your preconceptions proved right is having your preconceptions smashed into a million tiny slivers. We knew that the Scots have been invading London for generations, usually ending up as presenters on Radio 4 – but the flow in the other direction was a secret. At least it was to me. This evening, as I finish my pint and take another stroll round the village, the discovery makes me laugh.

You can read more about ‘Move Along Please' here.