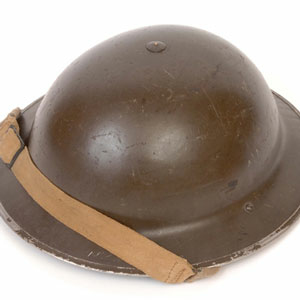 Because that's where the Warrior's coffin arrived at 8.32pm on November 10th 1920. He had been chosen from four exhumed bodies, one from each of the main World War One battlefields. The four were taken to a chapel in northern France and covered with Union flags. A Brigadier General, closing his eyes, touched one at random. This body was placed in a plain coffin and transported by boat to England. The French officer who saluted the warrior as he left France was Marshal Foch. In one of those quirks of coincidence, a statue to Foch (who lived until 1929) now stands opposite Victoria Station.

At Dover the Warrior was transferred to a train, which carried him to Victoria, arriving at 8.32pm. Here he stayed overnight, guarded by soldiers. The next morning the coffin was taken to Westminster Abbey on a Royal Horse Artillery gun carriage. Massive crowds lined the streets, everyone standing in total silence. The guard of honour was formed by 100 recipients of the Victoria Cross, and the Abbey contained 1000 widows and mothers. 100 of these had been specifically chosen because they'd lost their husband and all their sons in the conflict. Surely each one must have wondered if, by the remotest chance, the body in the coffin was that of her spouse or child?

The Warrior was buried in soil brought from each of the main battlefields. To this day his is the only tombstone in the Abbey on which you're not allowed to walk.

THEY SHALL NOT GROW OLD

Everyone knows about the Cenotaph ceremony held each Remembrance Sunday. Hardly anyone knows about the Victoria Station ceremony held each November 10th. Organised by the Western Front Association, it will only take half an hour or so out of your evening. There's a short narration, then at 8.30 the Last Post will be sounded, followed by a minute's silence, then a reading of the famous poem starting ‘They shall not grow old as we that are left grow old.' At 8.32, the exact anniversary of the Warrior's arrival at platform 8, wreaths will be laid, and then everyone will disperse.

It might seem strange to insert such a sombre interlude into your Big Night Out in central London. Why would you want to put a downer on yourself like that? But for me that's the whole point. The Unknown Warrior died precisely so that normal life could continue. If he'd made it back home he would almost certainly have liked his beers on a Saturday night, so I can't imagine he'd begrudge you yours. After you've paused in silence for him at Victoria Station, head off to a very noisy pub and raise a glass (or several) in his honour.