The Book of Seconds

The Incredible Stories of the Ones that Didn’t (Quite) Win 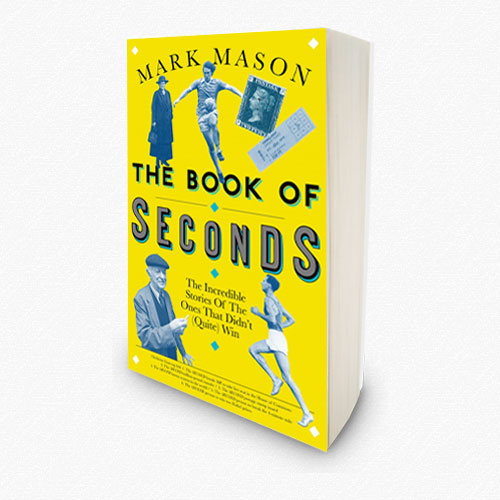 Who was the second US President to be assassinated? The second man to run a four-minute mile? The second team to land on the Moon? You probably don't know, because all the attention has been grabbed by (respectively) Abraham Lincoln, Roger Bannister and Apollo 11.

So you won't know that James Garfield was attended by Alexander Graham Bell, who invented a metal detector specifically to locate a bullet trapped in the President's body. Or that John Landy stopped during a race to check on another runner who'd fallen over - then still caught up with the leaders and won the gold medal. Or that on their way to the Moon Pete Conrad and Alan Bean danced in zero gravity to the pop song ‘Sugar Sugar'.

It isn't just people. The book includes K2, the world's second-tallest mountain, and acknowledged by mountaineers to be far more of a challenge than Everest (only about 300 have managed it, compared to about 3000 on the more famous peak). And Liverpool's Royal Liver Building, whose clock faces are the second-biggest in Britain - they're known as the George clocks because they were started at the precise moment in 1911 that George V was crowned. Then there's the second-wettest place on Earth, Cherrapunji in India. Or, as it was known during the days of the Raj, ‘the Scotland of the East'.

So come on, seconds - your time in the spotlight has arrived ...

‘Done with such verve and humour, and telling so many good stories, that you succumb to its manifest charms with a simple sigh of pleasure' Spectator