All change on the moniker front

Today is the 50th anniversary of David Bowie assuming his current name. On September 16th 1965 the man who had been born David Jones decided that his current stagename of Davie Jones might lead people to confuse him with Davy Jones of the Monkees. So instead he adopted the surname of Jim Bowie, he of knife fame. Here are some other ‘name change' facts: 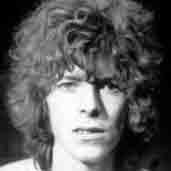