When Londoners use their feet to beat a Tube strike

As the Tube strike looms, I've been reminded of my District Line walk. Its second day coincided with a strike by Underground workers, so I was far from the only one treading the pavements. In case it provides any inspiration for those of you lacing up tomorrow, here's the relevant section from the book ... 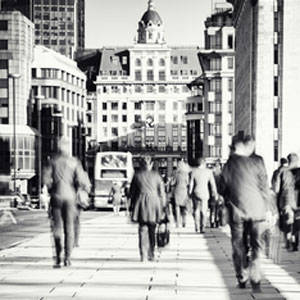 It would seem that a 21st century Tube strike takes you back two hundred years. On this gloomy and overcast Monday morning, London’s pavements have become rivers of humanity. There are occasional islands formed by a bus queue or a taxi rank, but mostly the tide presses on, a tide of unsmiling but uncomplaining pedestrians. It seems offensive to employ the phrase ‘Blitz spirit’ about Londoners’ reaction to a strike that hasn’t even wiped out the service completely; most Tube stations are open, though quieter than usual, as people shun a long wait in favour of exercise. But it does take a lot to seriously upset this capital. The percentages this morning, therefore, probably aren’t too different from those estimated by Richard Phillips as he started his 1813 walk to Kew from St James’s Park. Of the 16,000 who came into London from neighbouring villages to work each day, ‘8000 walk, 2000 arrive in public conveyances, and 6000 ride on horseback, or in open or close carriages’. The staggered timings seem similar too. Today’s rush hour continues well into mid-morning, while Phillips observed ‘clerks ... before nine o’clock ... from nine to eleven, you see shop-keepers, stock-brokers, lawyers, and principals in various establishments ... At twelve, saunters forth the man of wealth ... yet demonstrating the folly of wealth by his gouty legs.’

After Gloucester Road and South Kensington stations I reach the King’s Road, so-called because it was Charles II’s private route to Kew. In 1711, when they grew hay in Chelsea, Jonathan Swift complained that ‘the hay-making nymphs are perfect drabs ... There is a mighty increase of dirty wenches in straw hats since I first knew London,’ proving that nostalgia has always been a popular drug. Through the quiet streets of Belgravia, which since its construction began in the 1820s has always been the very poshest part of town, that tiny notch above even Mayfair. So nobby was it that the Duke of Bedford chose 6 Belgrave Square as his townhouse, rather than anywhere on his own estate of Bloomsbury.

Skirting the taxi queues at Victoria I head past the Catholic Westminster Cathedral, which almost no one seems to know will allow you up their tower for a fantastic view of London. The cathedral as a whole contains 12 million bricks – 2 million more than there are in the Empire State Building. The next station is St James’s Park. The park itself was where James I kept leopards, crocodiles and elephants, though by Richard Phillips’s time they’d made way for beggars. ‘One, a fellow, who had a withered leg, approached his post with a cheerful air; but he had no sooner seated himself, and stripped it bare, than he began such hideous moans as in a few minutes attracted several donations.’

Crossing Parliament Square I look down towards College Green, the patch of grass where the political media always hold their televised feeding frenzies, and remember their massed umbrellas during the 1995 Conservative leadership election (the one during which Michael Portillo made such inventive use of Brown’s hotel). The reason I remember the umbrellas (I was there in a minor capacity for the BBC) was that at one point it was thirteen minutes – I timed it – before anyone noticed it had stopped raining. This says a lot about the political media. (For the record, the first to notice was the ever-excellent Peter Allen of Radio Five Live.)

Round onto the Embankment. The tops of the City skyscrapers are lost in fog, and the Thames looks choppy, though the river’s appearance can change by the minute, which was why when Monet painted it he kept nearly 100 canvases on the go at one time. A Spanish-looking man consults his tourist map – at first it seems he’s got something in his eye, but no, he’s pulling down his lower eyelid simply to see the map more clearly. Passing the Embankment Gardens on my left, I imagine I can hear the rumble of a Tube train. This project is clearly getting to me. Then I realise it’s not my imagination – there’s definitely a rumbling. I hurry into the gardens; the sound seems to be coming from a brick structure behind a statue of the politician Henry Fawcett. The size of a decent garden shed, the structure is surrounded by railings that are clearly there to prevent further examination. But Mr Fawcett’s plinth is at a convenient height, and with some slightly risky footwork I’m able to clamber up and see that the structure has no top, or at least only one made of wire mesh. Down there, perhaps twenty feet below ground level, are two sets of tracks. I wait a couple of minutes, and sure enough a District Line train passes beneath. It’s thrilling to discover this Victorian ventilation shaft. A real moment of bonding with the Underground, of realising how close it can be without us knowing.

If you'd care for more of ‘Walk the Lines', you can read about it here.