Which way does the Queen face?

The trivia of British coins

It was today in 1931 that Edward VIII (as he then wasn't) met Wallis Simpson, the woman he would one day marry, but only after abdicating. His short spell as king in 1936 gave rise to one of my favourite bits of trivia about British coins ... 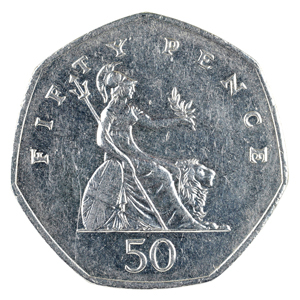 There are many contenders for this title, including:

- Pre-1992 1p coins are now worth more than 1p. This is because they're made of copper (post-1992 ones are merely copper-plated), and the metal's price has risen considerably in recent years.

- New versions of all the denominations were introduced in 2008, designed so that if you place their reverse sides together they form the Royal Shield. Try it - you need the 10p top left and 2p top right, above a middle row of (from left to right) 1p, 5p and 20p, with the 50p at the bottom. The £1 coin shows the shield in its entirety.

- Every post-1998 coin has the tiny initials ‘IRB' just below the Queen's neck. This stands for 'Ian Rank-Broadley', the artist who did the portrait of Her Maj.

- The sides of the fifty pence coin aren't straight - as you can see in the picture they're slightly curved, so that the coin will roll through vending machines.

But my favourite fact of all concerns which way the Queen faces. It's one of those answers I've got a mental block on - no matter how many times I look it up (by looking at a coin, obviously), I can never remember the answer. Can you? I've deliberately illustrated this post with a picture of the other side, to give you a chance to guess before you carry on reading ...

Here comes the plot spoiler then - she faces right. This is because ever since 1660, when Charles II became king, monarchs have alternated - one faces left, the next faces right and so on. The only exception to this rule was Edward VIII. He should have been a right-facer, but insisted on facing left. Shock, not to mention horror: another ancient tradition bites the dust, etc, etc. It never caused a problem, though. As he was only king for 10 months his coins were never issued (though a few were minted.) When George VI took over, he faced the way he would have done if Edward VIII had faced right. In other words, left. So when his daughter became Elizabeth II, she faced right.

If you want to judge whether or not it's her best side, compare a coin with a stamp - she faces left on those. Monarchs always do.