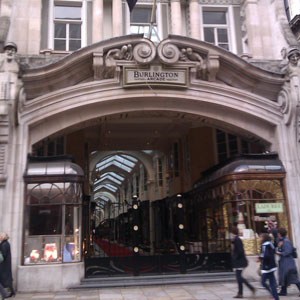 The story of how the ban came to be introduced in the 19th century was covered in a previous blog post, but essentially it was because the whistle was a coded signal to pickpockets warning them that the beadles were approaching. One day in the 1980s a beadle asked a shopper to stop whistling, only to discover that it was Paul McCartney. He granted Macca a lifetime exemption from the ban. (The beadle I spoke to the other day told me that when McCartney was first showing his current wife Nancy around London he brought her to the arcade and said: ‘Go on - tell her I'm allowed to whistle here.')

So the Beatle was the only person permitted to break the ban ... until now. In 2011, a young boy was brought to the arcade by his uncle. ‘He was only a strip of a lad,' the beadle told me, ‘about six years old. He was going through a tough time on the family front, and because of that things weren't going too well for him at school either. We started chatting to him, telling him about the arcade and its history and everything, and he loved it. Eventually we said to him: “Tell you what - if you can get a good report at school, you come back here and we'll give you a permit to whistle."'

Then earlier this year the boy's uncle returned to the arcade. He told the beadles that the boy (by now about ten) had indeed been working hard, and had received a good school report. So the arcade printed up a document with his name on it, confirming that he is allowed to whistle while on the premises. ‘His uncle brought him along again, and we reminded him what we'd promised. Then we gave him the permit. You should have seen his face. Lit up, it did. '